Neal Bawa: Technologist turned Scientist of Multifamily who treats his $250+ million-dollar multifamily portfolio as an ongoing experiment in efficiency and optimization 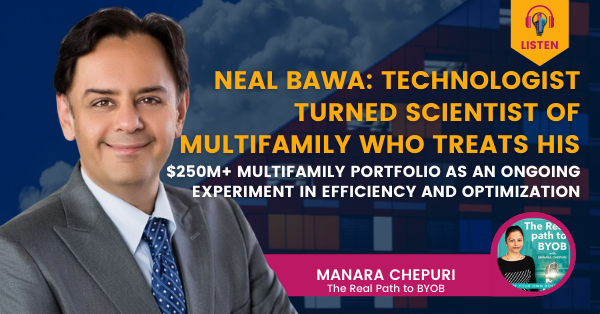 Neal Bawa: Technologist turned Scientist of Multifamily who treats his $250+ million-dollar multifamily portfolio as an ongoing experiment in efficiency and optimization

Neal Bawa is a technologist who is universally known in the real estate circles as the Mad Scientist of Multifamily. Besides being one of the most in-demand speakers in commercial real estate, he is a data guru, a process freak, and an outsourcing expert.

Neal treats his $250+ million-dollar multifamily portfolio as an ongoing experiment in efficiency and optimization.

The Mad Scientist lives by two mantras. His first mantra is that we can only manage what we can measure.

His second mantra is that Data beats gut feel by a million miles.

He is a top-rated, in-demand presenter at conferences across the country and been featured in over 50 top-rated podcasts and radio shows.

As a child Neal Bawa loved numbers and solved complex math problems in his head.  When he became Chief Operations Officer of the company that he was working for, he was extremely math and data-driven. He learned that the path of data was always the right path. It’s something that he is schooled in, has a degree in that area,  a computer science degree. When he started in the Real estate business he used the same passion for numbers in different scenarios, and basically tried to make optimizations to the bottom line or net profit. He believes that numbers prove people wrong all the time, especially very experienced people that start going by their gut feel, and that’s when they go wrong. He developed a system that allowed people to figure out the best cities and neighborhoods in the United States, It’s called Real focus and is on Udemy- this system kind of got him notoriety and he wasn’t a real estate guy then.  But he was having fun with numbers and people started inviting him to conferences and meetups and online. And it sort of just snowballed and before he knew it -he had this enormous database.Neal mentioned he loves teaching. He comes from a family of educators and did the same with Real estate, where he started educating others He says that to him the path to becoming successful goes towards one moving towards financial independence, whether you do that through stocks or coin, or real estate doesn’t really matter. He thinks what is important is that every person who wants lasting happiness needs to start in some tiny way towards financial independence. He also thinks that most people don’t understand happiness lies in financial freedom and it doesn’t matter if you make half a million dollars as a technologist or a million dollars as a doctor, you are not independent, you don’t have freedom.  It’s still a gold cage. A million-dollar doctor and a $25,000 a year receptionist are in the same exact cage. He thinks that the key to freedom, the key to growth is understanding that there’s no difference in the cage.